As someone who adores ancient history, I often find myself fascinated by the artistic and ideological footprints that people have left behind from millennia ago, while simultaneously being confronted by the Ecclesiastical reality that life is fleeting and “all come from dust, and to dust all return” (Ecclesiastes 3:20) . Our days and nights in Rome and Sorrento (including Pompeii and Herculaneum) were spent walking along that suspended tightrope, as we marvelled at both how much and how little had been left behind by those who had lived and breathed in those streets so many years before us.

In Rome, Isa and I threw ourselves into the city’s treasure trove of ancient ruins, religious art and complex political history by filling our short two days there with walks through the Roman Colosseum, the Roman Forum, Palatine Hill, the Vatican, St Peter’s Basilica and the Sistine Chapel. As people who had been avid Ancient History students (desperately clinging onto their HSC glory days, haha), tracing the footsteps of figures like Agrippina, Nero and Constantine between soaring Corinthian columns and under perfectly engineered Roman archways was enough to elicit a constant flood of gasps and “ahh”s from us at any given time!

For me, the most beautiful and awe-inspiring moments, however, were found seated under the unbelievable intricate and vast ceiling of the Sistine Chapel, painstakingly painted by Michaelangelo over the course of four years, and complemented by his own frescos on the walls and further paintings by Botticelli, Ghirlandaio and Perugino. Some say that Michaelangelo was more than an artist – he was also a theologian, as he worked to capture and communicate the biblical theology of salvation history in such an incredible harmony of artistic brilliance and representation. Not long after the painted ceiling was unveiled, writer/historian Giorgio Vasari had said, “The whole world came running when the vault was revealed, and the sight of it was enough to reduce them to stunned silence.” As we sat in that room with our necks permanently craned upwards in stunned silence, we understood why.

But I wonder how many of them knew of the infinitely more beautiful reality that existed; one whose light cast even the greatest of artworks into shadow. A reality that spoke and even now, speaks, of a sovereign, holy and eternal God, who graciously calls His rebellious and hard-hearted children home. A truth that speaks of a Saviour, the Son of God, laying His perfect and sinless life down in our place and then rising again, conquering death, that we might enter into a restored relationship with God through saving faith in Him, Jesus Christ. A gospel that changes everything. It was incredible to see the beauty of God’s hand in redemption history unfolding in such a magnificent painting, and that afternoon was such a stunning reminder of the salvation that is ours in Christ.

Unfortunately, we weren’t permitted to take photographs in the Sistine Chapel, but here are a few photos from the rest of our time in Rome, before we left to travel further south down the Italian coastline to the seaside town of Castellammare di Stabia (feel free to keep on reading below). 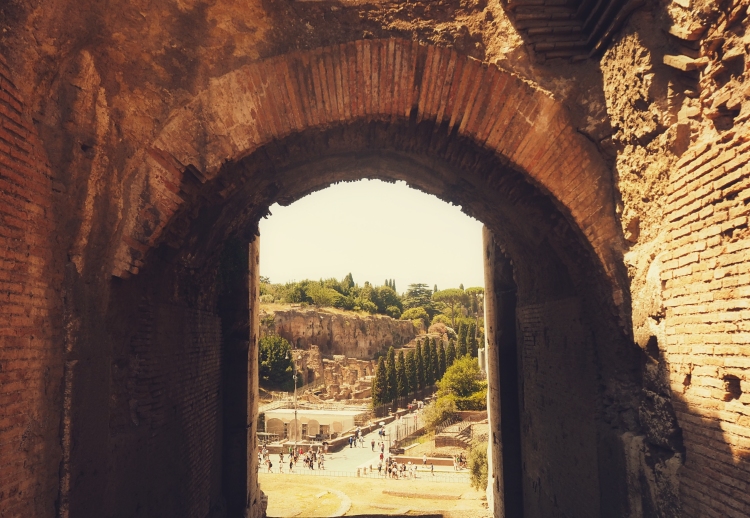 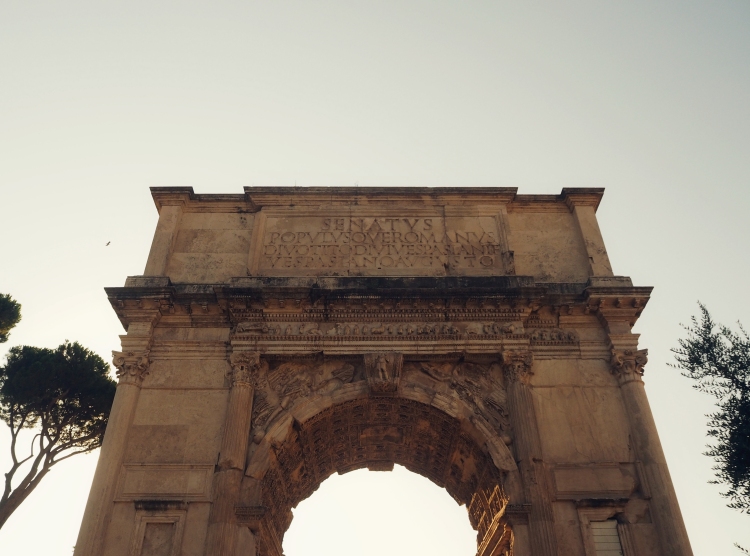 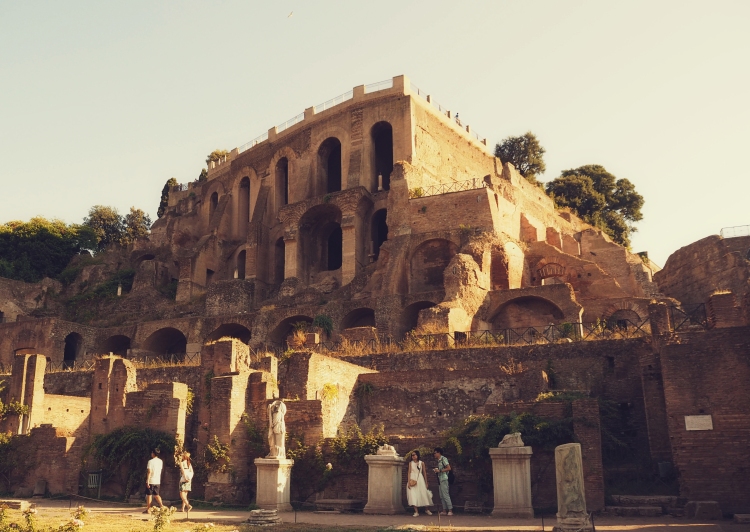 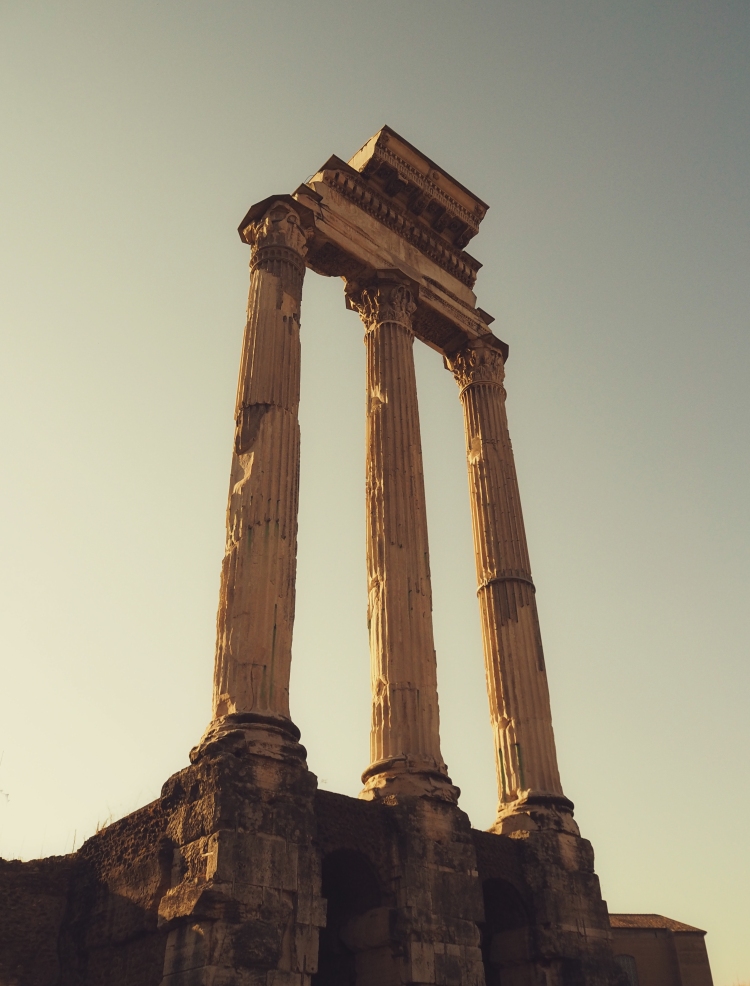 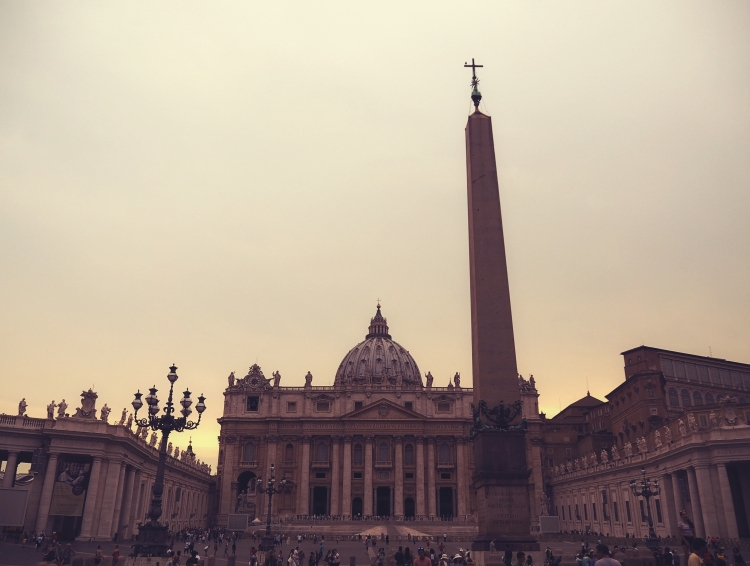 From Rome, we headed down south towards Sorrento, to stay in a little Italian seaside town called Castellammare di Stabia. Simply thinking back to those three days makes my heart feel full, as we shared in the privilege of being hosted by a wonderfully kind-hearted, warm and generous family, wandering through the ancient towns of Pompeii and Herculaneum (which hold and incredibly special place in my heart) and sharing in the best (and cheapest) seafood we’ve ever had in our lives at a little restaurant right by the sea at golden hour. Something else that was unique about this Italian town was the fact that every household’s taps were supplied with sparkling water, from a nearby spring. Having no choice but to drink sparkling water for three days straight was a little difficult for the both of us, but there was something rather novel about brushing your teeth and showering in water that you would ordinarily pay to drink in Australia!

Pompeii and Herculaneum were the primary reasons we ventured down the Bay of Naples and the afternoons spent wandering those ancient towns were wonderful, but feel like I’ve spent enough time raving about ruins (#sorrynotsorry – you actually don’t understand how much fan-girling was happening on those decumani and cardini…), so for your sake, I’ll let the photos below speak for themselves for now. Instead, something that deserves a much greater accolade is the unprecedented warmth and hospitality we were shown by our lovely host, Maria and her family. On the first night of our stay, Maria was moving about the kitchen, preparing some linguine and fresh mussels for dinner. Upon hearing about how much Isa and I loved seafood during a casual conversation, however, she instantly offered to prepare some dinner for us as well, and before we knew it, we were seated at the table with Maria and her husband, sharing in an incredibly delicious meal and wonderful conversation, glasses of prosecco in hand. There were moments of hilarity as we chatted about food, travel, wine (whereby Maria’s husband expressed how Australia’s 300% alcohol tax was a phenomenon he would never understand) and the world, and as we watched the sun set over the horizon line just beyond the apartment’s balcony with a warm sense of contentment filling our hearts and stomachs.

Our last couple of days in Italy saw us hop aboard a few more rickety Campanian trains, soak up the sea breeze with Mt Vesuvius perpetually in our peripheral vision and mournfully consume our last scoop of gelato, before we packed our bags (weighing in together at a total of twenty-seven kilograms and four separate bags of liquids/gels, ha!) and prepared to board a plane to Istanbul, Turkey. 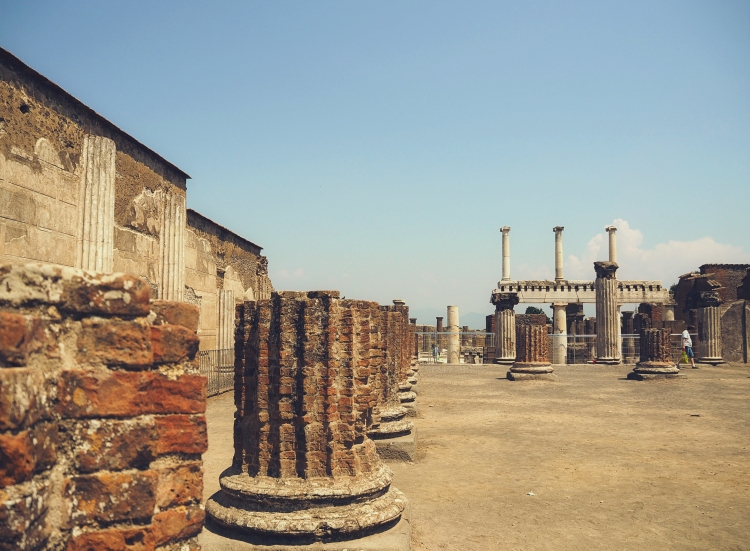 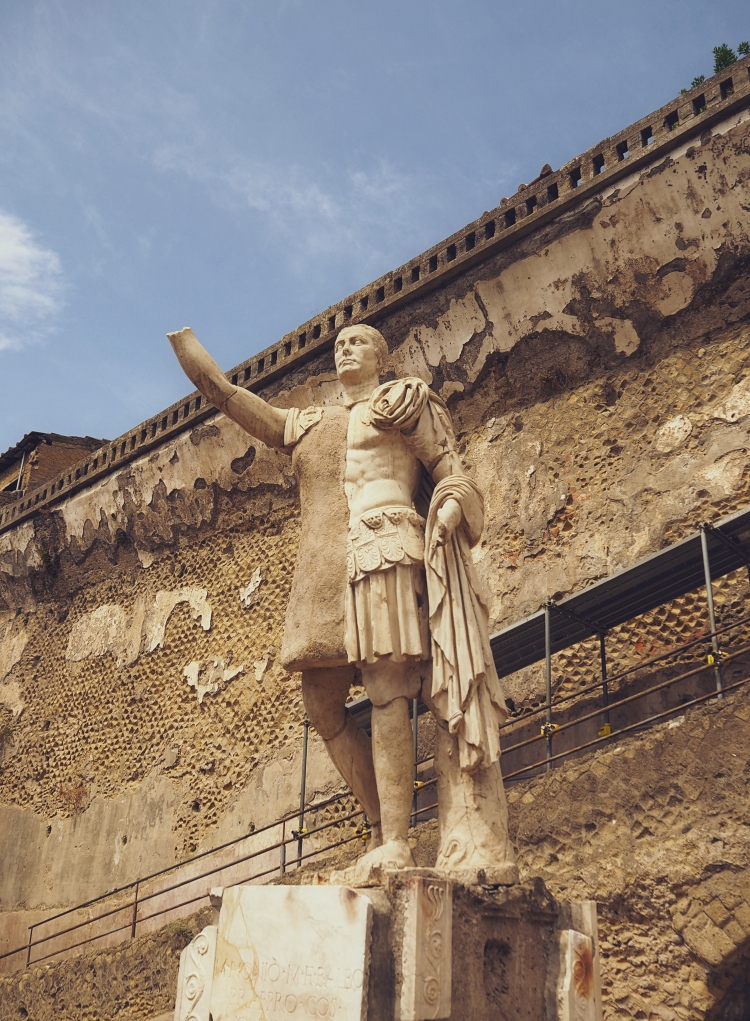 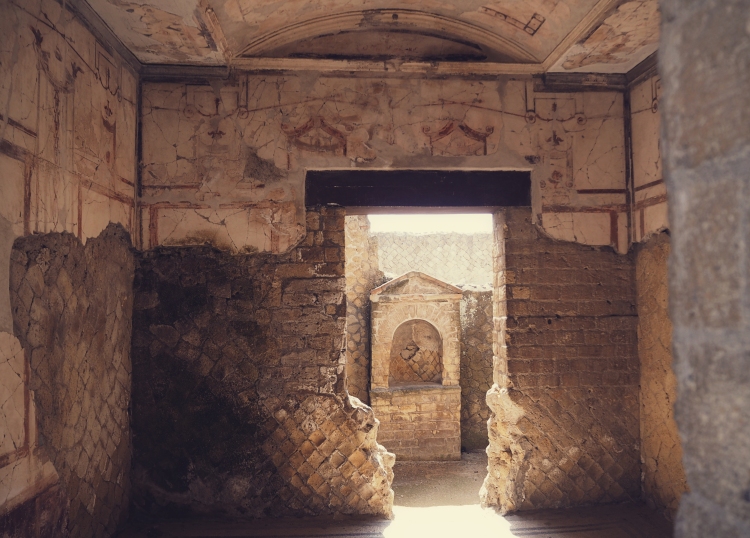 Last week, I reached Psalm 23 and dwelt on a line in a verse that I hadn’t ever paid too much attention to before. Verse 5 ends, “my cup overflows”, or in the King James Version, “my cup runneth over”. As I read that verse again, my mind’s eye was filled with a beautiful picture of sufficiency, contentment and satisfaction. In fact, over-sufficiency, over-contentment and over-satisfaction! In God, we have all that we need and He hears and meets our heart’s deepest longings and cries. Regardless of my circumstances, in Him, my cup runneth over.

Thank God for the incredibly special memories and experiences that Isa and I have had in Italy, and for the wonderful, kind and hospitable people that we’ve met along the way. As we look back, we can see God’s guidance and provision at work in so many ways and are so thankful for how smooth our journeys have been so far. Also, please thank God for sustaining us over the last two weeks of our travels, particularly for keeping us in good health and strengthening us as we experienced some intensely hot days in Italy.

Thank God for bringing us safely to Turkey (sorry, you can tell that I’m running a little behind with blog posts!). Upon our arrival in Istanbul on Tuesday evening, we hit our first roadblock when the airport transfer shuttle (that we had confirmed multiple times with our hotel) simply didn’t show up. It was reaching sundown and as we – two lone girls – stood there in the arrivals terminal at Atatürk airport, already having to dissuade local men from trying to start conversation and with the unhelpful knowledge that Taken 3 was set in this city and stories of friends who had jumped out of a suspicious taxi circulating in our minds, we found ourselves in a mild state of panic. There we were, weighing up our options and trying to work out the safest way for us to get to our hotel that was twenty kilometres away from the airport. After praying, making a couple of phone calls and concocting a plan of attack, we organised an independent transfer service with an agency at the airport and waited for the driver to show up. We were both on insanely high alert (picture us taking surreptitious photos of the car’s number plate, our driver and using location services throughout the whole drive to monitor our route in relation to our destination – you may or may not think that this was a bit excessive, but better safe than sorry, right?) and praise God, we made it to our hotel safely! Feeling exhausted and emotionally drained, that night was certainly a humbling reminder of how many things exist beyond our control and the importance of trusting in God’s goodness and sovereignty, regardless of the outcome.

Thank God for how He has continued to grow me in my love and understanding of Him through online resources like sermons from my church and talks from CBS. While listening to them sometimes fills me with an acute desire to be able to physically take part in those communities again, they’ve been a wonderful source of solid Bible teaching and a reminder of the greatness of Christian community while I’ve been adjusting to the constant movement that comes with travelling.

In light of that, as I’m coming up to five weeks of travelling now, I’ve been going through something of a roller coaster of emotions as the date of my return to Paris draws nearer. For the most part, I’m eagerly awaiting the day that I’ll be moving into my studio apartment (Monday 17th) – when I’ll no longer need to live out of a carry-on-sized suitcase, when I’ll be able to grocery shop for a period of longer than 3-4 days (it’s the small things!) and when I’ll be able to join a church (more on that in future posts) and settle down in a more long-term capacity. At the same time, I’m mentally preparing myself for renewed senses of loneliness and homesickness, as I work out what a weekly routine without the physical presence of Australian friends and family will look like. Please pray that God will calm my heart and hold me steadfast in my contentment and reliance on Him, despite the waves of emotions that will inevitably come crashing down on my shores. Please pray that He might be guiding me, protecting me and giving me wisdom as I go through these final legs of travel and make the transition to long-term life in Paris.

Thank you so much for your prayers, friends. A big thank you especially to those of you who so kindly send me messages and check-in with me on the days in between my blog posts. It has been such a joy to continue committing you to prayer and to hear about how God has been answering those prayers and growing you in marvellous ways, despite the fact that we’re oceans away from each other!